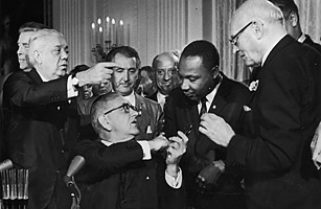 The Civil Rights Act of 1964, which ended segregation in public places and banned employment discrimination on the basis of race, color, religion, sex or national origin, is considered one of the crowning legislative achievements of the civil rights movement. First proposed by President John F. Kennedy, it survived strong opposition from southern members of Congress and was then signed into law by Kennedy’s successor, Lyndon B. Johnson. In subsequent years, Congress expanded the act and also passed additional legislation aimed at bringing equality to African Americans, such as the Voting Rights Act of 1965.