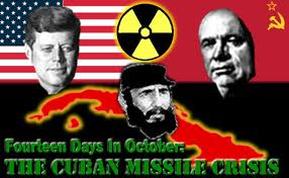 During the Cuban Missile Crisis, leaders of the U.S. and the Soviet Union engaged in a tense, 13-day political and military standoff in October 1962 over the installation of nuclear-armed Soviet missiles on Cuba, just 90 miles from U.S. shores. In a TV address on October 22, 1962, President John Kennedy (1917-63) notified Americans about the presence of the missiles, explained his decision to enact a naval blockade around Cuba and made it clear the U.S. was prepared to use military force if necessary to neutralize this perceived threat to national security. Following this news, many people feared the world was on the brink of nuclear war. However, disaster was avoided when the U.S. agreed to Soviet leader Nikita Khrushchev's (1894-1971) offer to remove the Cuban missiles in exchange for the U.S. promising not to invade Cuba. Kennedy also secretly agreed to remove U.S. missiles from Turkey.