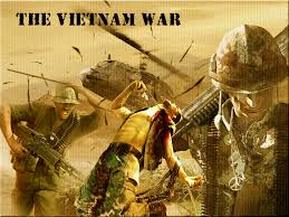 The Vietnam War was a long, costly armed conflict that pitted the communist regime of North Vietnam and its southern allies, known as the Viet Cong, against South Vietnam and its principal ally, the United States. The war began in 1954 (though conflict in the region stretched back to the mid-1940s), after the rise to power of Ho Chi Minh and his communist Viet Minh party in North Vietnam, and continued against the backdrop of an intense Cold War between two global superpowers: the United States and the Soviet Union.  More than 3 million people (including 58,000 Americans) were killed in the Vietnam War; more than half were Vietnamese civilians. By 1969, at the peak of U.S. involvement in the war, more than 500,000 U.S. military personnel were involved in the Vietnam conflict. Growing opposition to the war in the United States led to bitter divisions among Americans, both before and after President Richard Nixon ordered the withdrawal of U.S. forces in 1973. In 1975, communist forces seized control of Saigon, ending the Vietnam War, and the country was unified as the Socialist Republic of Vietnam the following year.
Next