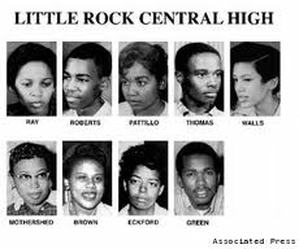 In a key event of the American Civil Rights Movement, nine black students enrolled at formerly all-white Central High School in Little Rock, Arkansas, in September 1957, testing a landmark 1954 U.S. Supreme Court ruling that declared segregation in public schools unconstitutional. The court had mandated that all public schools in the country be integrated "with all deliberate speed" in its decision related to the groundbreaking case Brown v. Board of Education of Topeka. On September 4, 1957, the first day of classes at Central High, Governor Orval Faubus of Arkansas called in the state National Guard to bar the black students' entry into the school. Later in the month, President Dwight D. Eisenhower sent in federal troops to escort the "Little Rock Nine" into the school, and they started their first full day of classes on September 25.