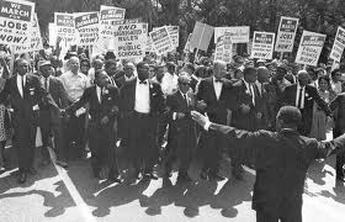 On August 28, 1963, more than 200,000 Americans gathered in Washington, D.C., for a political rally known as the March on Washington for Jobs and Freedom. Organized by a number of civil rights and religious groups, the event was designed to shed light on the political and social challenges African Americans continued to face across the country. The march, which became a key moment in the growing struggle for civil rights in the United States, culminated in Martin Luther King Jr.’s "I Have a Dream" speech, a spirited call for racial justice and equality.
next